July started out on our second week with Agassiz National Wildlife Refuge. Our project was removing old fencing from before the ownership of the refuge on a parcel of land they now own. Stretching a mile east to west and half a mile south, we were tasked with removing metal t-posts, wooden brace posts, and the barbed wire itself. With barbed wire fencing, most fences use metal t-posts. Every 500 meters or so they add in wooden brace posts, or at corners, to reinforce the fence line. After a rather unproductive week of herbicide spraying – due to weather and commute – this project was well received by the whole crew. With the fence usually having four strands of barbed wire, we worked out an efficient system for our five-person crew; a person on each strand and someone else to help remove posts or unclip the wire as we go. Those wooden posts were the difficult part, as we had to pull them out of areas with lots of roots or wet mud grabbing it from below. Shovels came in handy for the more stubborn ones. Our success rate was tarnished by a lone metal t-post, surrounded by smaller trees and impossible to remove. With us finishing this project quicker than the host expected, we started hauling our collection back to the shop fitting all we could in the bed of our F-150. Driving from the shop and back to the site would take 45 minutes, so we only managed two loads on the last day before driving back to Brainerd. 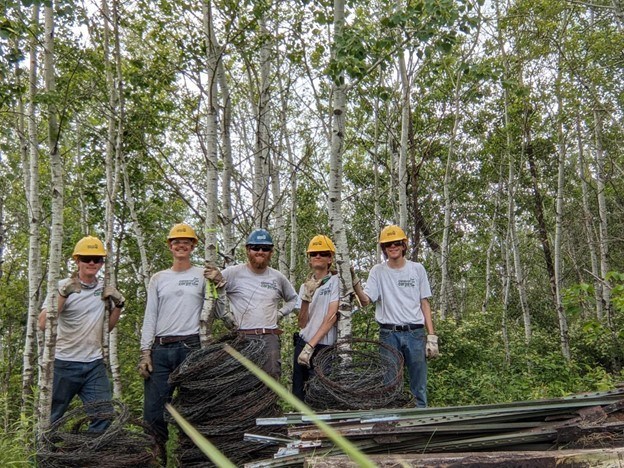 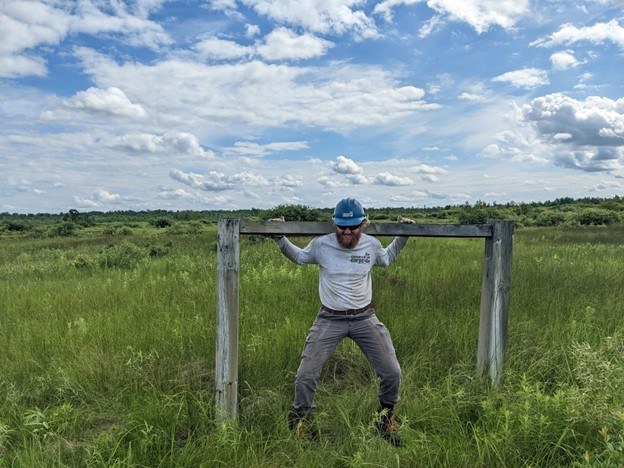 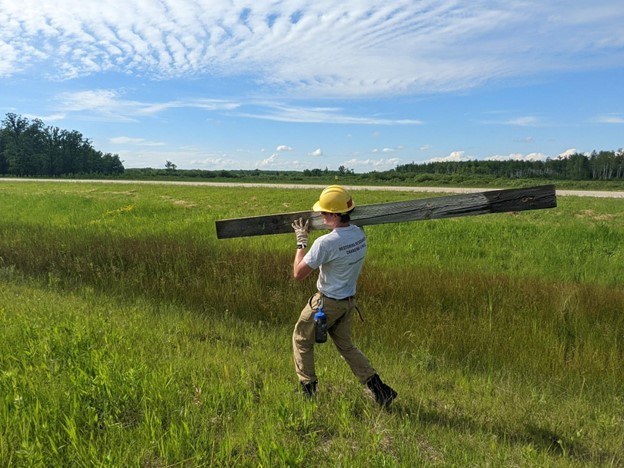 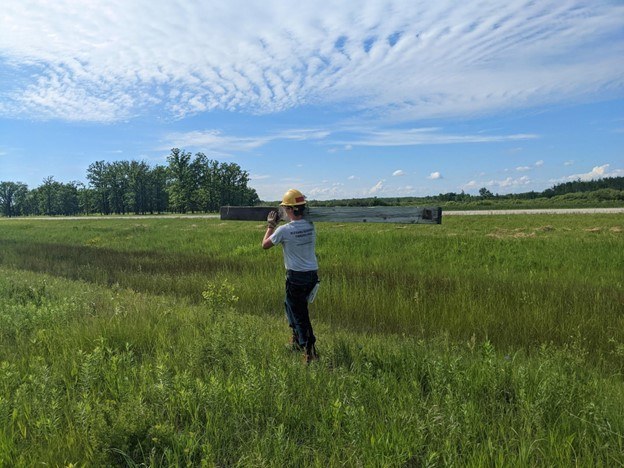 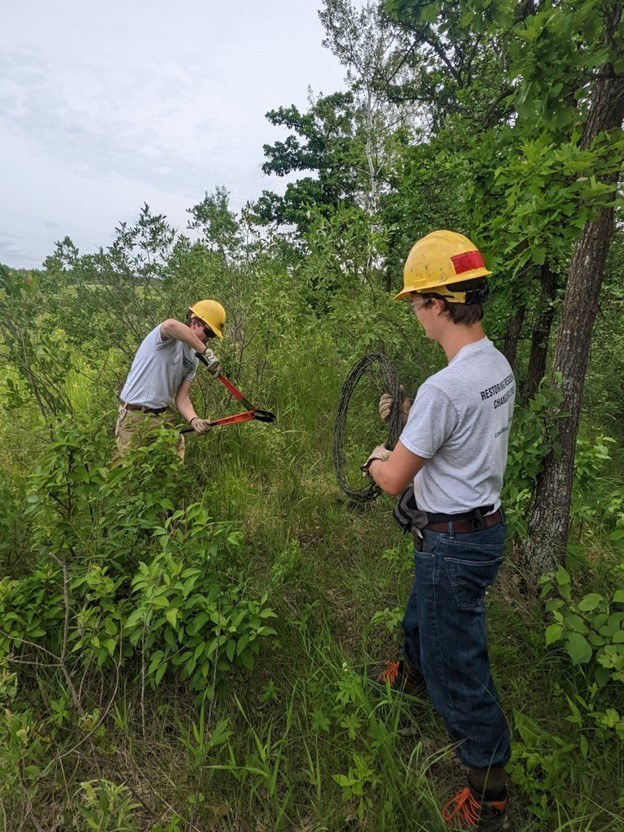 This past week, while working with the Glacial Ridge National Wildlife Refuge, we were spraying crown vetch. But our host also gave us the option to take breaks by finding fence piles left in the refuge and hauling them back to the shop. These piles were what was left from a wildfire that burned through much of the refuge. When we were consumed by tiredness or when weather was not good for spraying herbicide, we started searching and hauling. In contrast to our other fencing project, these piles were already pulled, and most of the posts were large and wooden, but we had a trailer this time to carry them. Under the last pile we were grabbing, we saw a skink, taking refuge under the wooden posts left there. With the large piles we hauled back, we then separated metal wire and t-posts from wood. We also removed any nails, metal brackets, and staples that were left in the posts in the time we had left for those days. Simple labor like hauling fence or removing barbed wire helps to break up a season often involving herbicide spraying. 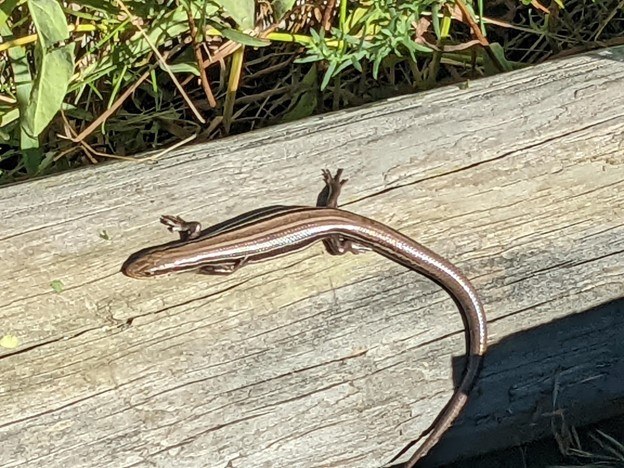 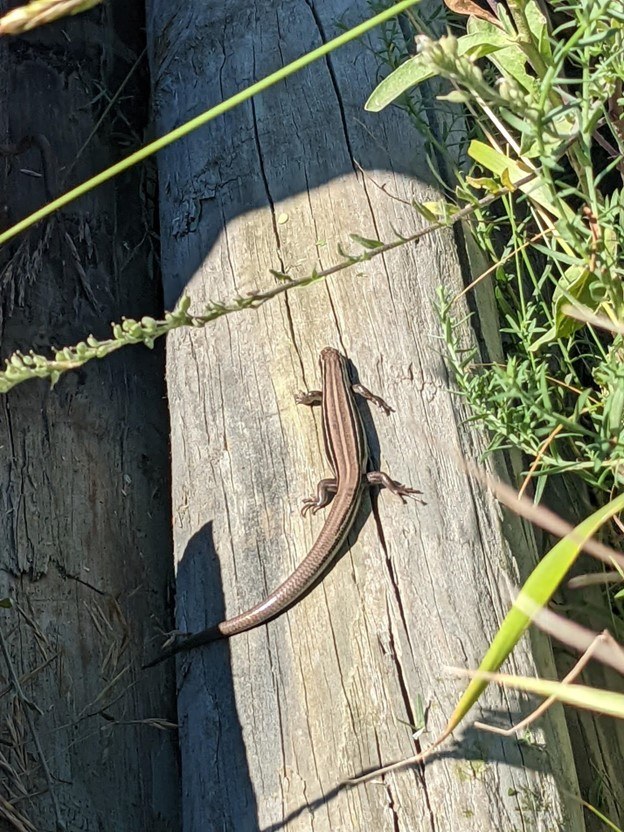