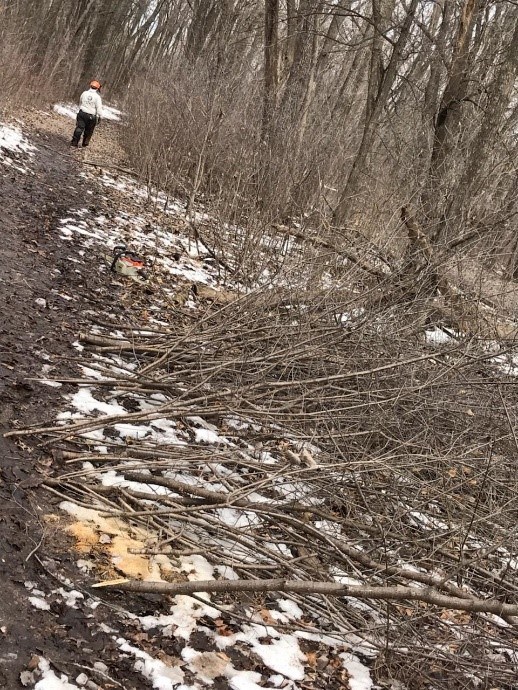 Have you ever been enjoying a hike or walk along a park trail in early spring and noticed piles of dark-barked shrubs lying around the trail? Or perhaps you’ve witnessed groups of individuals in brightly colored helmets removing what seems like an excessive amount of vegetation and piling it up. These brush piles can be a common sight in many managed natural areas around the Twin Cities, and if they’re on public land, chances are a Conservation Corps MN & IA (CCMI) crew put them there.

These piles are the remains of European buckthorn (Rhamnus cathartica), an invasive species that is highly prevalent in the Metro area. Also known as common buckthorn, this species originates in Europe and was brought over to the United States as a prized hedge plant. With its scraggly shape, sharp thorns, and dense growth, buckthorn does make a nice thick hedge. Unfortunately, it is also highly competitive and incredibly adept at taking over natural areas, especially disturbed or urbanized areas. If left to its own devices, most buckthorn populations will push out native species until they have created a dense monoculture. Any managed natural landscape around the Twin Cities likely manages for buckthorn—and that’s where CCMI crews and all those brush piles come into play.

Buckthorn management is one of the primary projects that Central District Corps crews work on throughout the winter and early spring (as well as in the early and late autumn). Although it takes a lot of time and resources, buckthorn treatment is fairly straightforward.

The first step involves cutting the buckthorn plants with what’s called a “low-stump” cut. Basically this means cutting the stem flush or a few inches above the ground level using anything from hand trimmers to chainsaws, depending on the size of the buckthorn. Once cut, the buckthorn is piled either for future burning or for removal (though in some highly natural or segregated sites stems might be left on-site to decay). The left-over stumps are then treated with a “cut-stump treatment.” This is a form of chemical treatment where you target the cambium layer (or layer just inside the ring of bark) of the stump with herbicide. The cambium layer is where many nutrients pass through the stem to the roots, so the herbicide is pulled down into the root systems, fully killing the plant. Without killing the roots in this way, buckthorn has the nasty ability to re-sprout with even greater force and twice as many stems.

*Understandably, chemical treatments often make people nervous, especially in public recreational areas, so I should note that cut-stump treatments are chosen specifically for their safety. They are one of the most effective chemical application methods to ensure that chemical doesn’t run off anywhere other than the treated area, and the least amount of chemical is utilized.

So next time you’re enjoying a stroll down a trail and see piles of brush around, look for the dark bark, the sharp thorns, and the black berries. Chances are a Corps crew has passed through there, fighting a valiant battle against invasive buckthorn to improve the overall condition of the native landscape.