A mile on the wings of bats

It’s been seven weeks since the “bats n’ bucks” crew first came together in Ames, Iowa. Inga a Minnesotan (far left), Amanda and Amy Iowans, and myself a New Yorker (far right) make up a unique sect of the Conservation Corps, called the Wildlife Studies Crew. Our abbreviated five month term is broken up into two different research projects. The purpose of the first study is to gain knowledge on the migratory patterns and behaviors of the Northern Long Eared bat. The second study, expected to start in mid-November, is focused on learning how and why chronic wasting disease affects White-Tailed deer, hence the witty name ”bats n’ bucks.”

The Northern Long Eared bat, identifiable by their prominent ears, is a threatened species. This project was drafted to allow the Department of Natural Resources (DNR) insight on the migratory pathways these bats are using in relation to the thousands of wind turbines (mills) that call Iowa home. Although wind turbines provide a clean energy resource, their spinning blades can often wreak havoc on flying animals such as bats. For this reason, Copperhead Consulting and Stantec were hired to organize teams of biologists to track bats using radio transmitters.

Our first few weeks of the project were spent deploying acoustic detectors. With a microphone and a SD card, these devices are able to pick up high frequency echolocation calls and store this data. A program then does most of the hard work, differentiating the calls between different species of bats. A site with a high number of Northern Long Eared bat calls would then be deemed a possible good site for netting.

The second, much more highly anticipated stage of the project started a few weeks ago with our first captured and tagged Northern Long Eared bat! To accomplish this, a very fine mesh material must be stretched in between two 3 meter high poles (pictured at the end). To have the best chance of catching bats, this system is usually set up in a “fly way” or a part of the forest that has some funneling affect the bats would take to or from water. A higher success rate is ensured using a lure that emits a high frequency distress call to peak the curiosity of the bats (pictured left).

Lucky for us, even though Northern Long Eared bats are the focus of our project, all bats that are caught in the nets must be processed for weight, signs of white nose syndrome, and forearm length. Here are some pictures of the different kinds of bats caught so far: red bat (top left), hoary bat (top middle-left), silver bat (top middle-right), big brown bat (top right), evening bat (bottom left), little brown bat (bottom center), and northern long eared bat (bottom right). My personal favorite being the silver bat. All bats are released shortly after data is recorded. 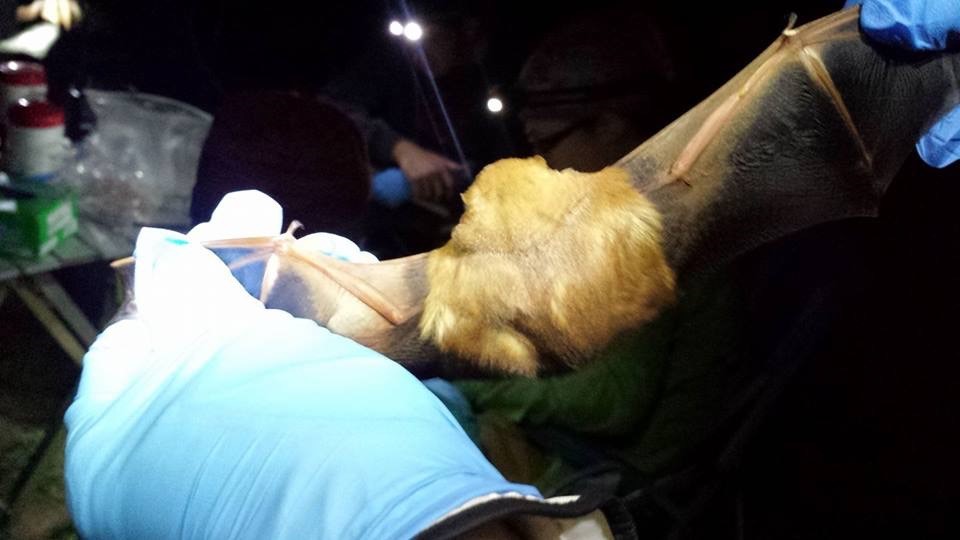 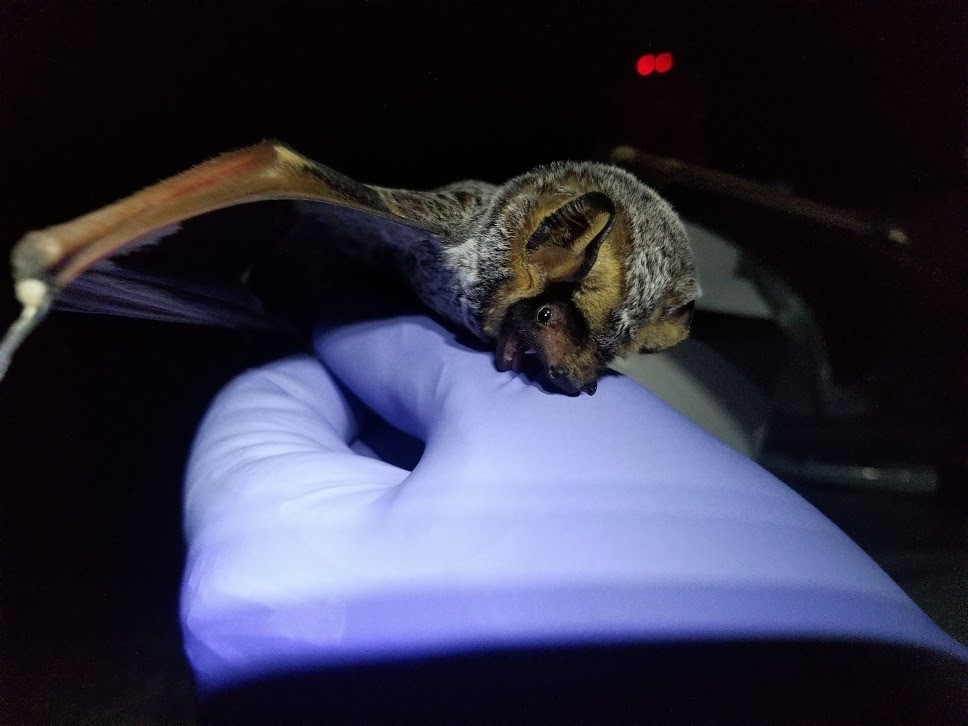 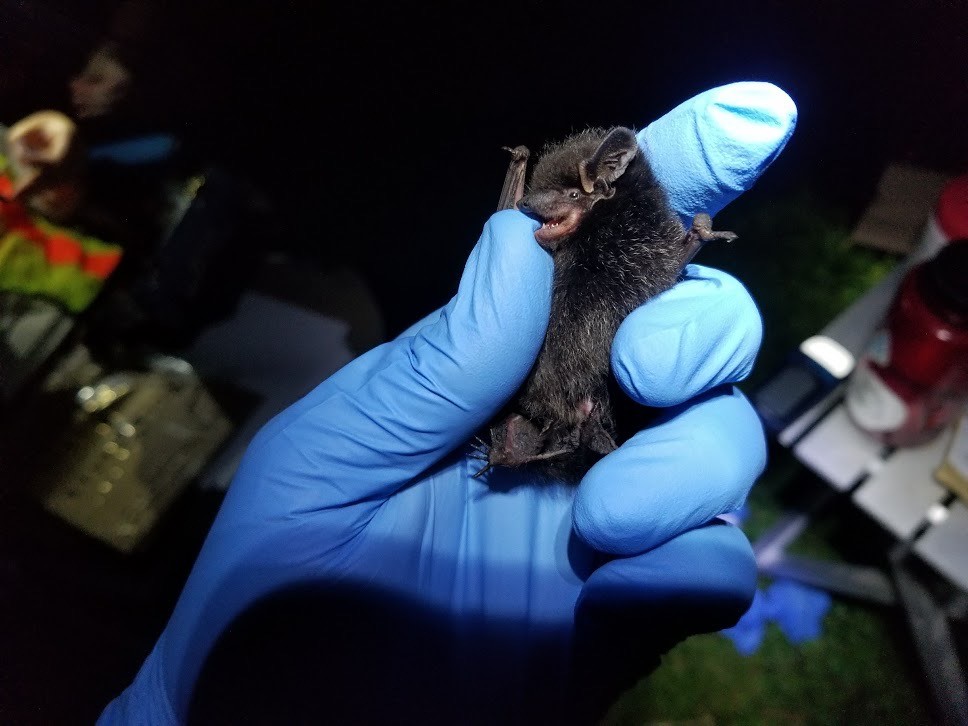 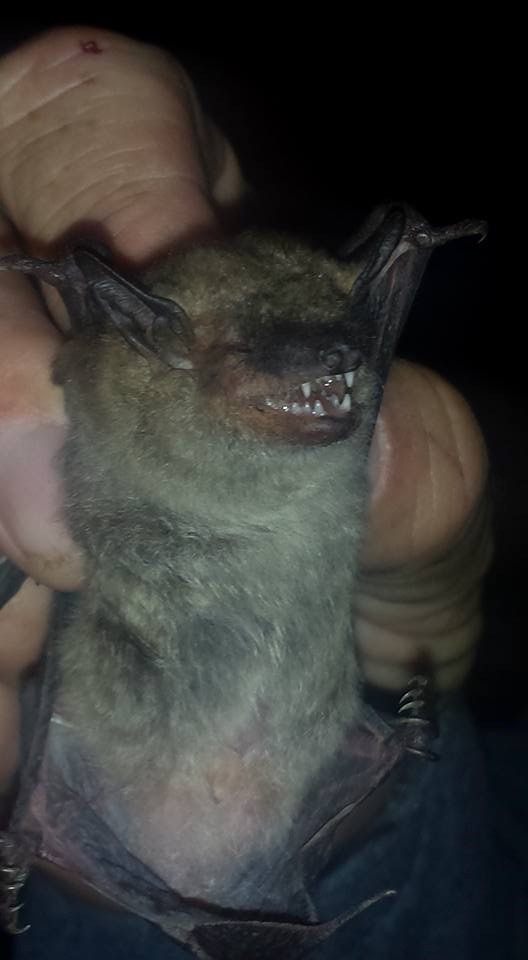 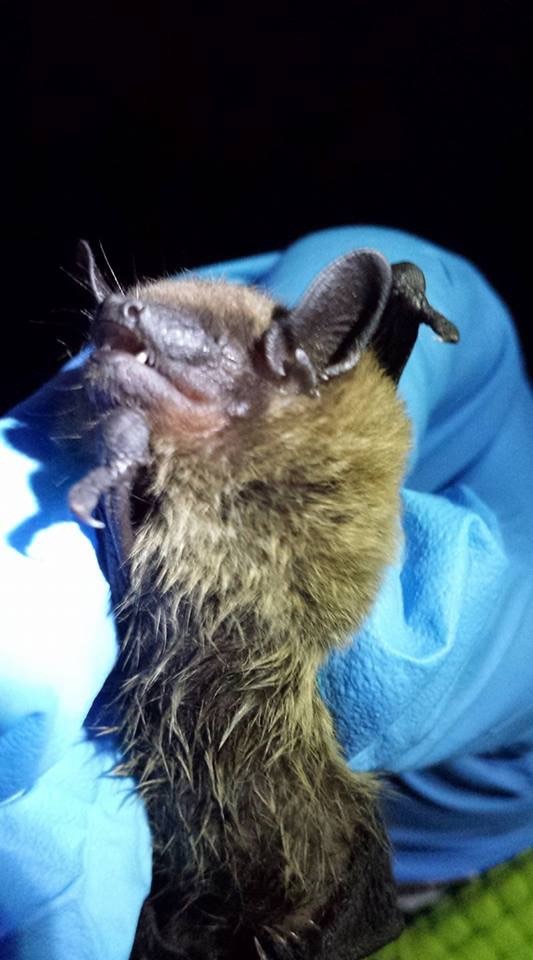 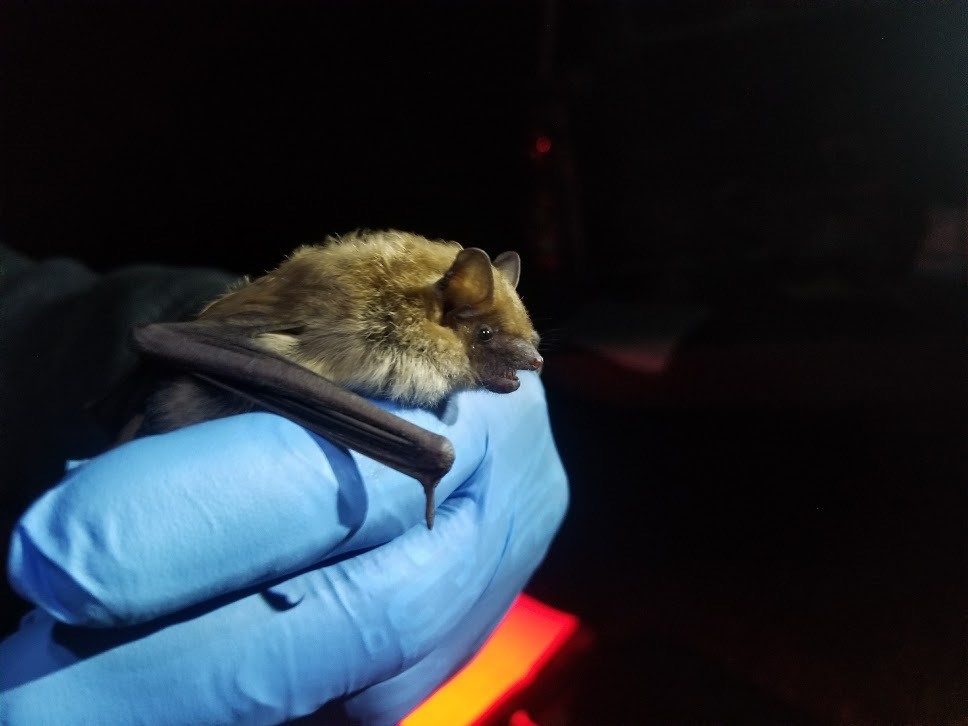 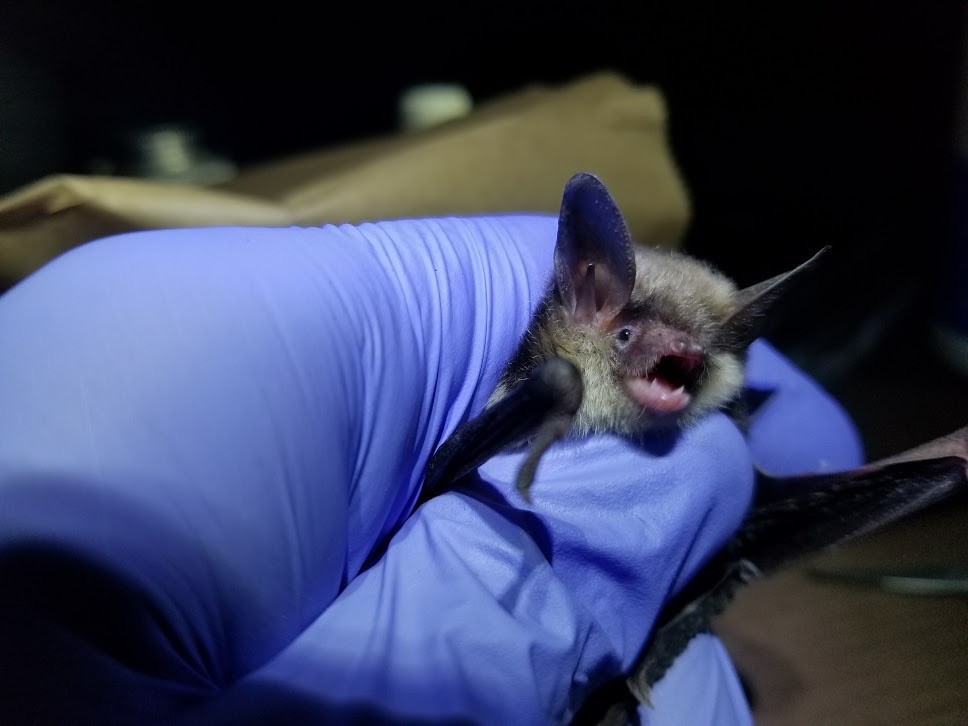 After a northern is caught, it must be weighed to determine that the glue, plus the radio device will not be more than 6% of its body weight. A small patch of fur on its back is then cut away (left), glue is applied (center), and the transmitter is stuck on (right). 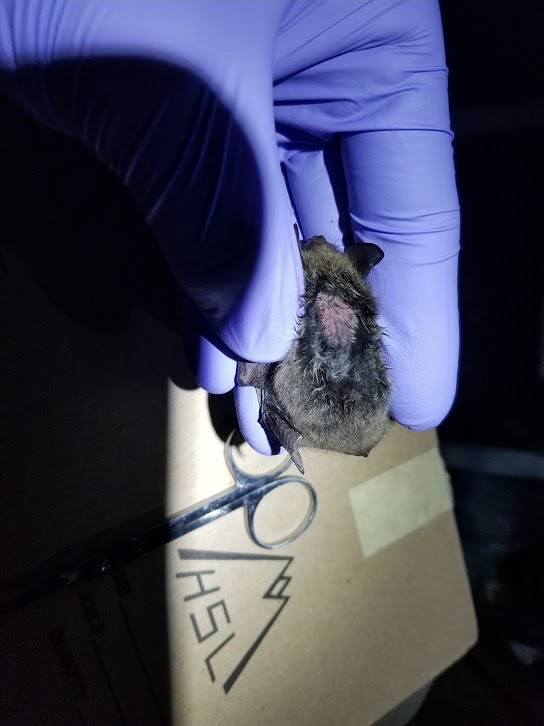 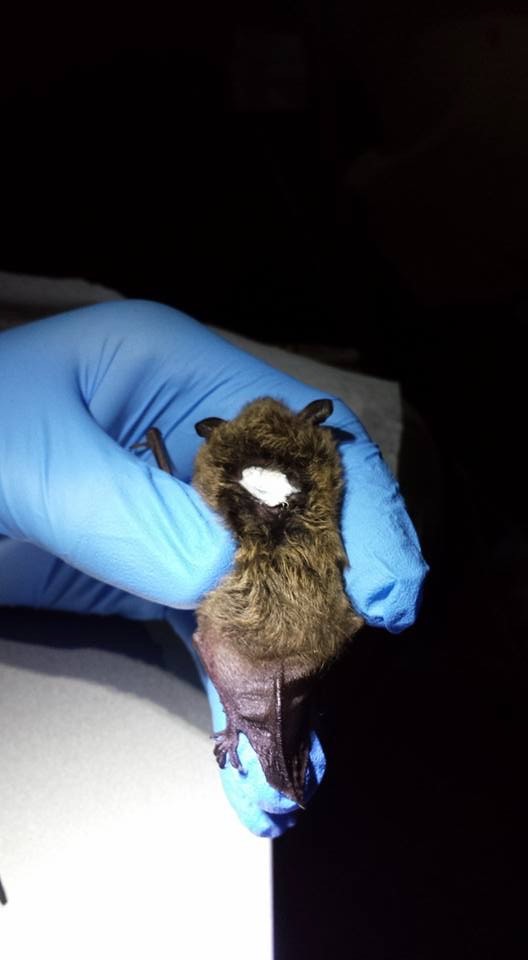 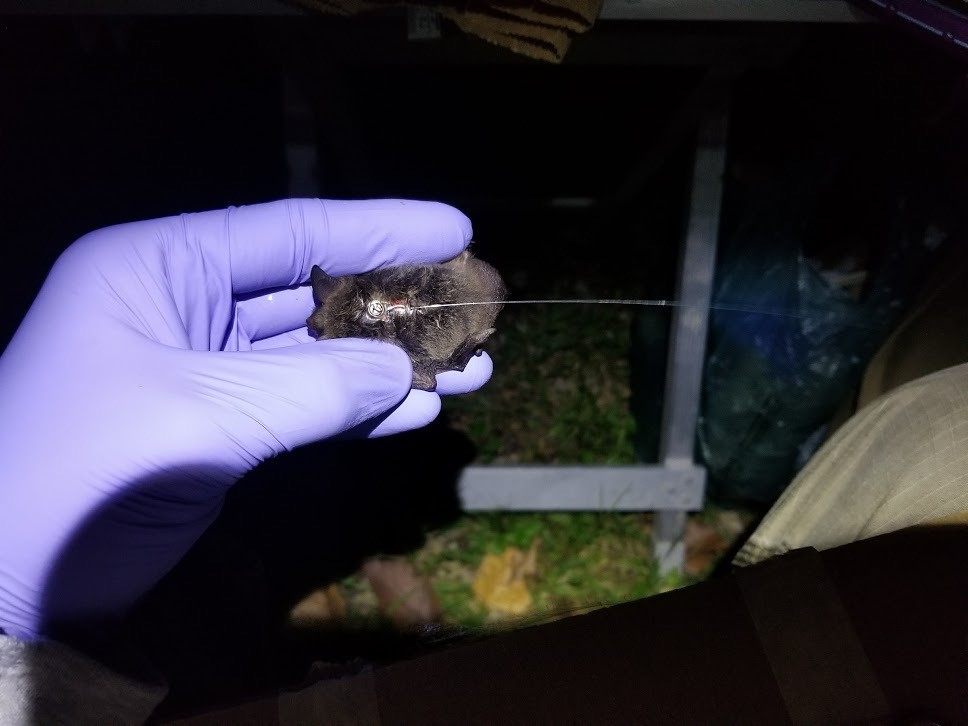 These transmitters are set to a specific radio frequency which is tracked at night by plane and during the day on foot. And no, I have not gone up in the plane. But that doesn’t diminish the coolness factor of having one and it’s still a great reassurance when we hear it flying above our heads. On our end, a 3 pronged antenna is used to pick up the signal when in a mile radius (Tamara- left). Once a tree is determined as the bat’s roost tree, it is tagged (center), and the area around it is surveyed for tree species, and foliage dominance. This system works great until the transmitters start to die after a few weeks…then the five element antenna comes out (Amy- right)! It was my pleasure to record her struggling through the dense tree branches (https://youtu.be/7zUEfW-dsbQ). 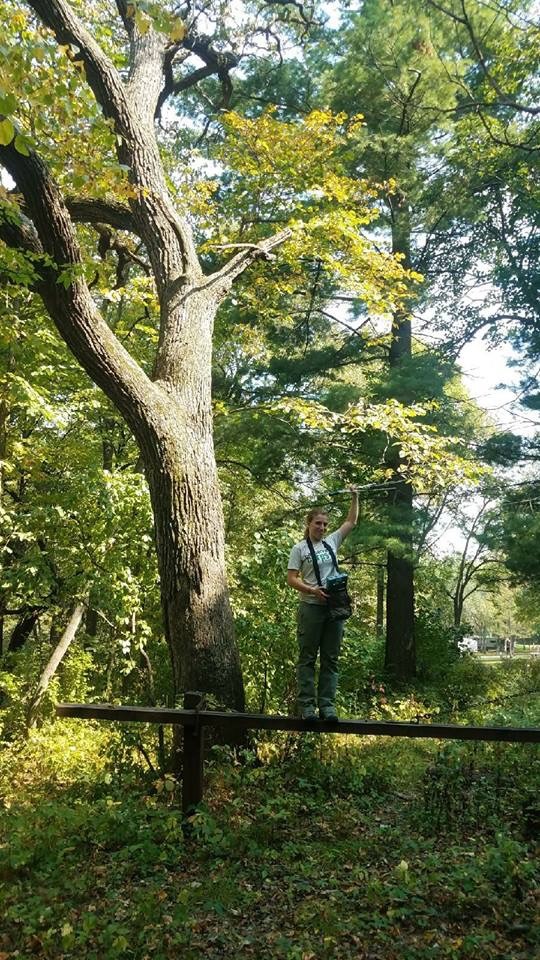 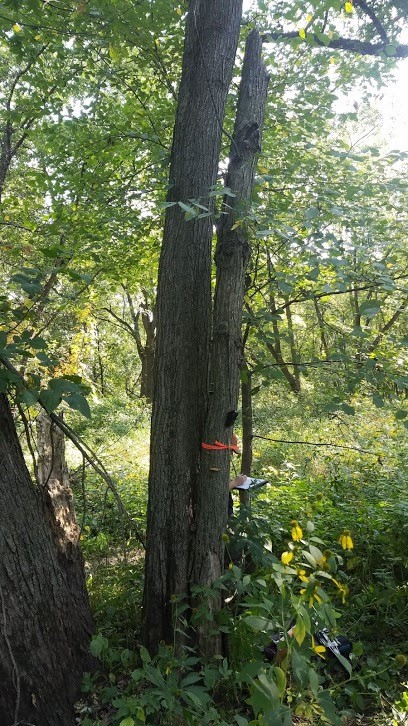 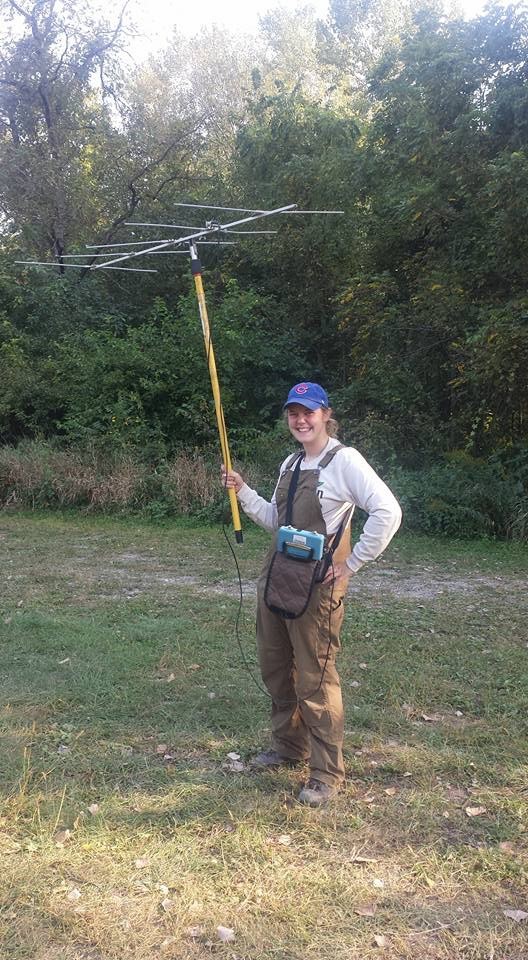 This week, we begin the next stage of our project with hibernacula studies (where the bats hibernate). To learn more about this part of the bats migration, we will be setting up thermal imaging cameras and actively monitoring the bats at night using night vision goggles! Stay tuned for an update on this exciting stage next month!