A Glimpse of Tamarac

The start of the project proved to be difficult. We had neoprene waders for a bog that is too hot for such a garment. Our crew got off to a rough start due to this issue. Luckily, the project got better as the week progressed. We borrowed waders with a thinner fabric from our project host at Tamarac National Wildlife Refuge. Our goal was to grid through bogs in search for purple loosestrife donned in herbicide PPE, waders, and bug nets.

Native plants found in this habitat include:

Thanks to the hard work done by past Conservation Corps crews, Tamarac NWR had a fairly low infestation of loosestrife in the units we gridded with their Biological Technician, Keith, a capable and hardworking host. With the wind that the weather brought on Wednesday that week, we were instead tasked to cutting trees along the refuge’s Bruce Boulevard to provide more clearance of leaning trees and visibility around blind corners. The maintenance guy, Tom, supported us in any way we needed that day, allowing us to enjoy the fun part of chainsaw work: felling trees. If a saw had issues, he brought us another one. If it got dull, he swapped the chain out. My crem members and I got some valuable saw time in before the summer ended amongst weeks of herbicide spraying while only having to do the fun parts of felling.

With calmer winds on Thursday, we continued with tackling loosestrife. But this time, we needed help. This bog unit had more open water, unlike the spongey trampoline bog layer of the other units. We utilized the channels to navigate this bog unit with a canoe, allowing us to get into the unit where there was somewhat solid trampoline ground. With that week ending, we managed to get all the known patches and then some within the refuge. The next week, we would focus on upland invasives, but this project week is something that my crew and I will look back on and remember. My members have told me how much they enjoyed this project, despite its difficulties. Unique experiences help to outweigh tough trudging. 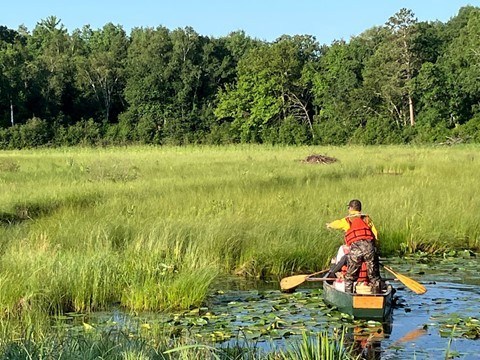 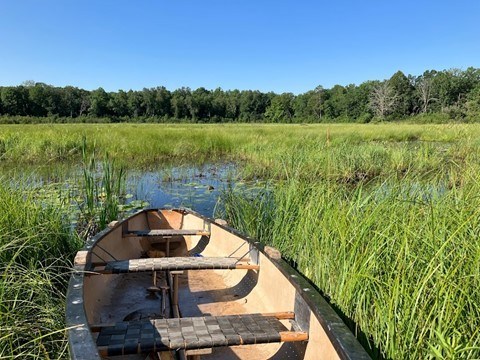