The Spring Blizzard of ’18 will go down in history as the day that many victories and defeats were had. Like many of the corps members, the perilous journey I was embarking on tested my limits in ways I had not imagined. Days before, a winter storm was predicted to wreak havoc (and sadness) across a large portion of the Midwest.

The day began normally, picking up my crew at the rec center. The wind and snow had been picking up, but in relation to the impending weather, it was literally the calm before the storm. The day progressed and the conditions continued to worsen, until it was near white out. As we returned to the rec center the youth found out many of the parents were having trouble just getting there. The last person ended up leaving about 45 minutes late due to the snow. I finally put my steel stallion of a van into drive and ATTEMPTED to drive away, but quickly realized I was not going anywhere. I tried everything short of putting it in neutral and pushing, but to no avail. I informed the others of my bleak situation, only to find that they were facing similar issues.

I would have been stuck and this story would have been over, but Tess saved the day. Through the wind and snow, she came trudging, shovel in hand. The shovel made quick work of the snow near the tires, and with a hard push the van leapt forward like an ambushing leopard. The victory was short lived, as it quickly became apparent the van could not make it up a gentle slope just out of the rec center parking lot.

I maneuvered the most tedious 180 feet of my driving career, and then promptly got stuck 100 feet later. For 45 minutes I struggled to get my van to move, until a stranger with an old jeep and tow rope saved me. The kind stranger pulled me backwards far enough to get a rolling start at the gentile incline ahead, and I slowly but surely started to accumulated momentum. From that point I knew I had to keep moving, or risk getting stuck again. The next 50 minutes would be a grueling test of the human spirit and determination. Skating over the Minneapolis streets in 4,500 lbs. of cold 15 passenger van fury revealed a post-apocalyptic scene of utter chaos. Cars, vans, busses, and even emergency vehicles scattered the landscape like buckthorn stumps after a massive timber massacre.

Finally I saw the towering smokestack of the Hamms brewery and was able to breathe a sigh of relief. As I pulled in to the parking lot, I saw many other brave crew members working together to dig out cars. A smile made its way across my face as I rolled past in my Ford spaceship. Although I had made it back, I was not out of the woods yet. The lot would be plowed by Tuesday, and any cars in the way would be towed. Additionally, the van needed to be parked but most of the spots were buried under 1 to 2 feet of heavy wet snow. With just 3 shovels, but exemplary teamwork, we were able to park the van and a few other vehicles in about an hour. While I was shoveling, I quickly became aware that my land-boat like Avalon probably wouldn’t make it home. Turns out that other crew members didn’t want to brave the elements as the sun was setting, so we decided to just stay at a nearby crew members house. A night of stories and board games were to follow, thus concluding the harrowing tale of the Spring Blizzard of ’18. 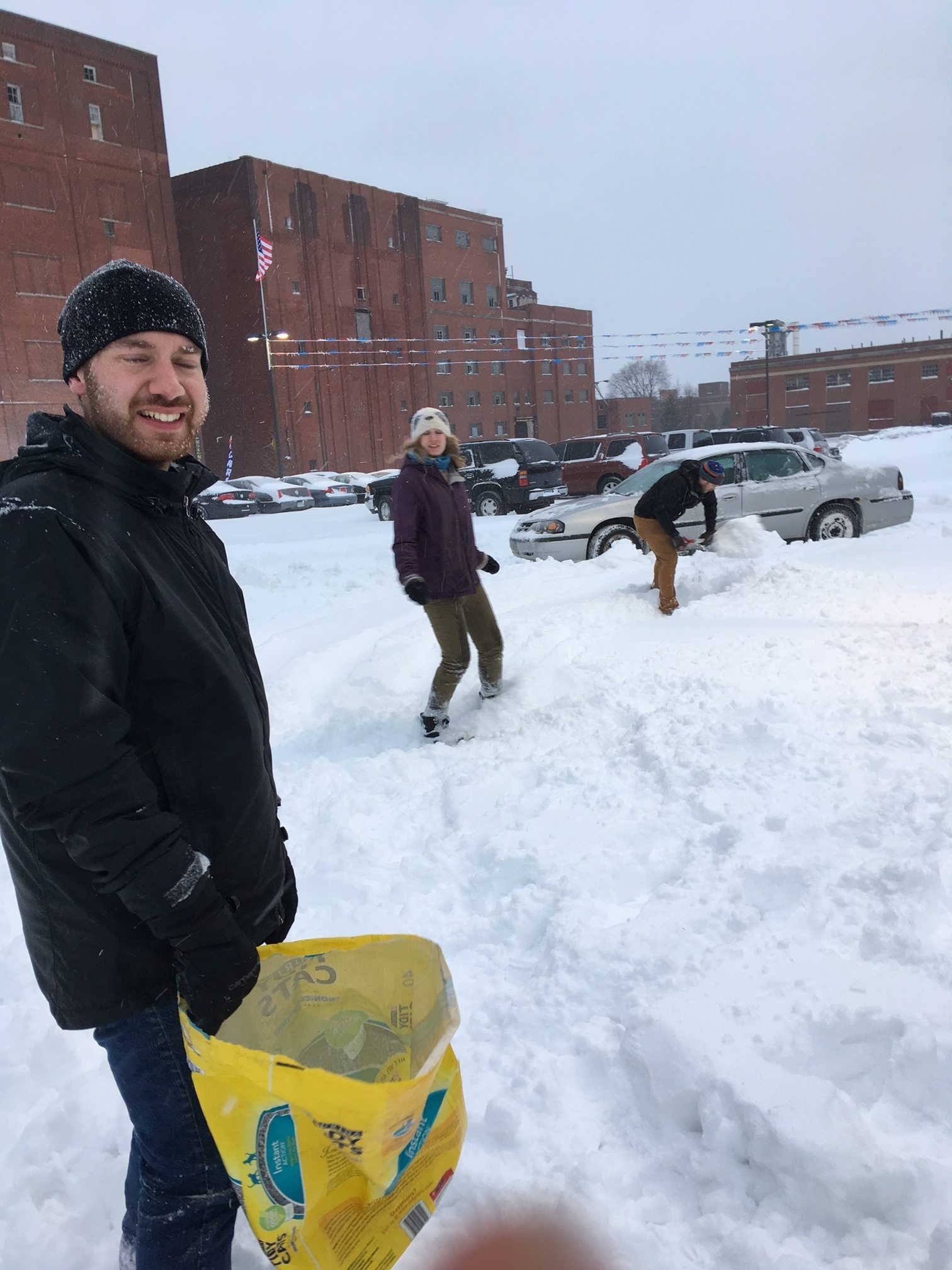