Back in July, our crew spent a week working on the Superior Hiking Trail. We had the pleasure of working alongside some wonderful Superior Hiking Trail Association (SHTA) volunteers and our very own Gooseberry Crew. It was one of our most physically challenging projects, but also one of the most rewarding. The goal of the project was to transport lumber to the build site, re-route a trail leading up to the bridge, build the bridge, and construct stairs using natural materials around us.

We started the week off by hauling lumber out to the build site. This seemed easy enough but the 1.5 mile hike along steep, narrow, rocky and root-filled trail definitely tested us. We spent a good hour or so just brainstorming the safest and most efficient way to carry the materials out. With the help of a one-wheeled game cart, we were able to shuttle larger material loads. We ultimately had to stop using the cart after the rocks and roots made it too difficult to keep upright. The three 24 foot stringers of the bridge were assembled beforehand and weighed over 500 pounds. It took 7-10 people with the help of moving straps and handles to carry these out to the build site. We learned the importance of clear communication and understanding our own physical limits when carrying these very long and heavy beams. 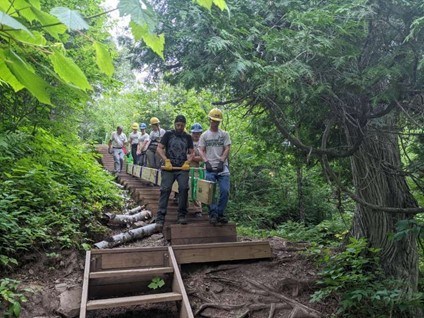 Once all the material was hauled out, we split into groups to accomplish three different tasks. One group was assisting in the bridge construction, another was re-routing a section of trail and the last group was finding large flat rocks to use as steps leading to the bridge. I initially was assisting in finding flat rocks for the stairs. The ideal rock for the job had a flat surface that was at least one foot in length and a foot and a half or so in width. The rock also had to be close to a foot thick as well so that it wouldn’t crack when used repeatedly. With these criteria, the rocks we found ended up weighing 400-900 pounds. We utilized rock bars to pry the large rocks out of their resting spots. Then we rolled them onto a rock sling where up to eight people would lift the rock as a team. This tested our communication skills and knowing our physical limits even more. 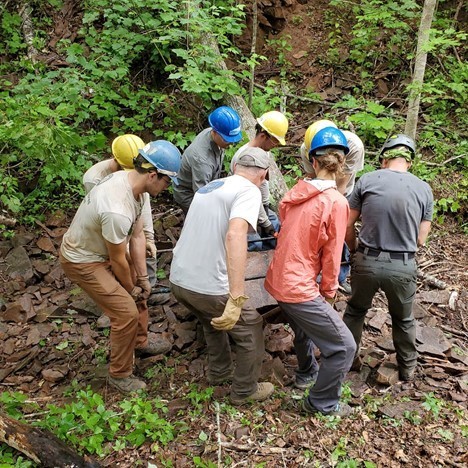 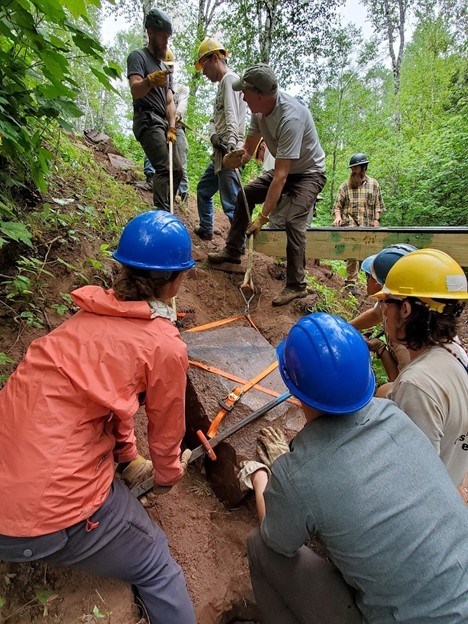 After working on moving rocks for a while, it was time to switch tasks to make sure nobody was too overworked. I moved onto constructing the new re-routed section of trail. I had never done trail building work before and never realized how much thought and work goes into it. The first step was clearing the brush away from where the trail would be. That means clearing the brush above and below the surface; we ended up digging out all the roots that were in the trail’s path. If this step was not completed the dirt would have compacted around the roots creating a tripping hazard. The next step was refining the curvature of the trail. This is where the most thought comes into play. The main goal of the trail is to “keep people on, and water off” as the SHTA volunteers would say. To accomplish this the trail must have some curves to it but not so much that trail users avoid following the trail. Our project host guided us through walking the proposed trail with our arms held out to the side, parallel to the ground to feel where the water would run off the trail. His words during this process were “don’t think, be water”. It was a very intuitive process that took me a few moments to understand. We then made the trail so that each “water off” area had a slight bend in it. Once that was settled, we marked out the finalized trail and began going through the four different stages of building tread. The stages are downslope, backslope, bench, and critical edge. Each stage has a specific task that in the end created the user and nature friendly trail shown below.

The last task for all the conservation corps members was to assist in placing the stringers on the bridge. All 20 volunteers assisted in pivoting the 24 foot long pieces of lumber up and over a small river bed to their final destination. It was surprisingly easy with everyone working together and we all cheered once they were in place. The STHA graciously allowed us to sign the underside of a board that was placed in the middle of the bridge. I felt so honored not only to be a part of such a big project but to have my signature placed on it as well really made it special. 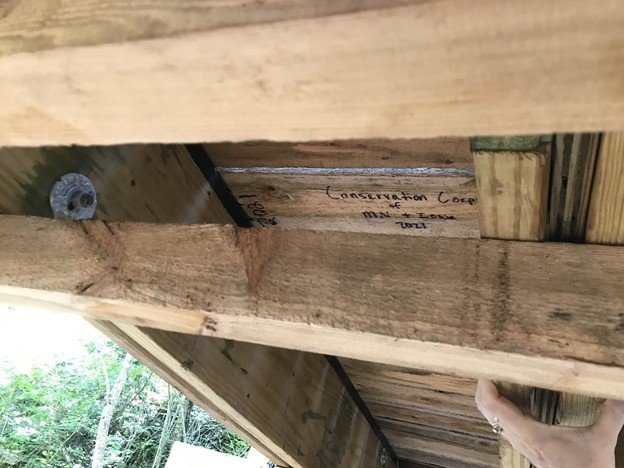 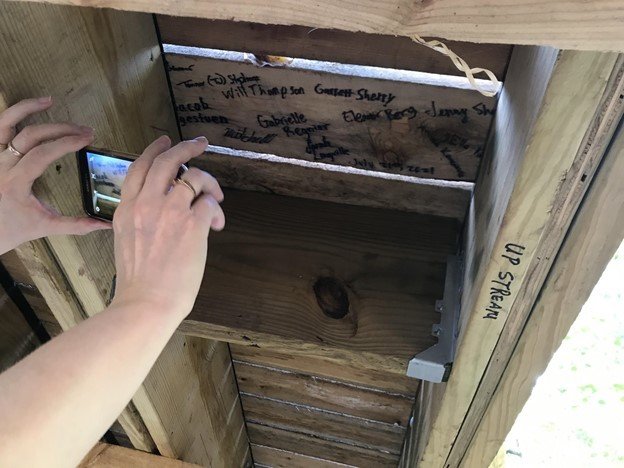