“It’s a horrible monster!” Pete yelled as the rest of our crew (YO2) and YO3 quickly gathered around him.

“It’s a horrible monster,” he said again, pointing to a glove lying on the path.

I looked down at the glove and didn’t notice anything out of the ordinary at first, but as I bent down for a closer look I saw a giant spider scurrying across the mulch-covered pavement. It darted towards the glove where it stopped for a moment, so I pulled out my phone and zoomed in for a close-up. The spider was beautiful! Roughly the size of a quarter, it was marked with brown, black and tan stripes. Its legs were studded with tiny hairs and you could even make out the eight tiny eyes that dotted its cephalothorax.

There’s no denying that spiders are extremely polarizing creatures. You either love them, or you just can’t stand them. After Pete’s encounter with that impressive spider at Lilydale Regional Park, I determined I didn’t really want to be a spider-hater, so I decided to do some research and man was I missing out!

Minnesota is home to dozens of interesting species of spiders, so for this blog I want to highlight just a few. Let’s start with Pete’s stealthy “attacker,” the fishing spider.

Dark fishing spiders (Dolomedes tenebrosus) are fairly common throughout the Midwest, but they are also one of the largest species found in Minnesota. Fishing spiders can grow to be one-inch long. So, you can’t really blame Pete for being a bit startled! Typically found near ponds, swamps or other bodies of water, fishing spiders eat mostly insects, tadpoles or even small fish. Fishing spiders also posses the extraordinary ability to “skate” across water.

The considerable size of the fishing spider is sure to catch anyone’s attention, but nothing caught my eye faster than a nursery web spider (Pisaurina mira) darting through the grass at Hidden Falls Regional Park, carrying a pea-sized egg sac between its frontal appendages or “palpi.” At first glance, a nursery web spider may look similar to a Carolina wolf spider (Hogna carolinensis) or its relative, the fishing spider (nursery web spiders and fishing spiders both belong the family Pisauridae) but if you look closely, you might notice the distinct “racing stripe” along its abdomen. The patterns or markings on a nursery web spider can vary, but the tan, gray, brown or black coloring remains relatively consistent. Perhaps the most notable characteristic of this spider is the great care it gives its egg sacs. This spider does not spin a web to catch prey, but constructs a “nursery web” in order to shelter its young.

Both the fishing spider and the nursery web spider are fascinating Midwest natives, but perhaps my new personal favorite is the bold jumping spider (Phidippus audax). This stout, hairy spider had also appeared at Hidden Falls, albeit in a far more conspicuous location. It was time for lunch, so I began to walk back to the Corps truck when I noticed the gray, black and white spider repelling down the side of the door. Slightly larger than a dime, the spider perched on the side of the truck, exposing its amazing green, iridescent chelicerae or “jaws.” It was so cool! Ranging from 4-20 mm in length, bold jumping spiders are extremely quick. They have to be, of course, since they do not spin webs in order to catch prey. Instead, they use their outstanding eyesight and agility to pounce on their prey.

If you’re a spider lover, I hope you’ve appreciated my boyish rant about spiders in Minnesota. If you are one of the many spider-haters, just remember that I once belonged to the spider-fearing camp as well. It may not work for you, but next time you see a big, hairy, eight-legged creature, try to take a closer look at it instead of backing away. You just might learn to love those “horrible monsters” in the end. 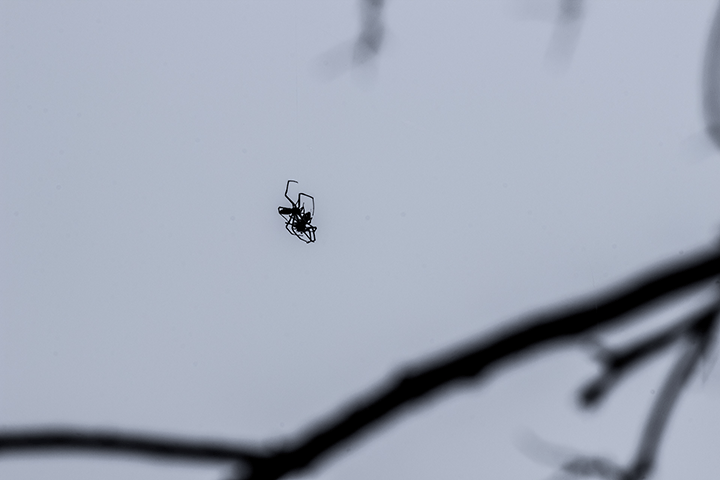 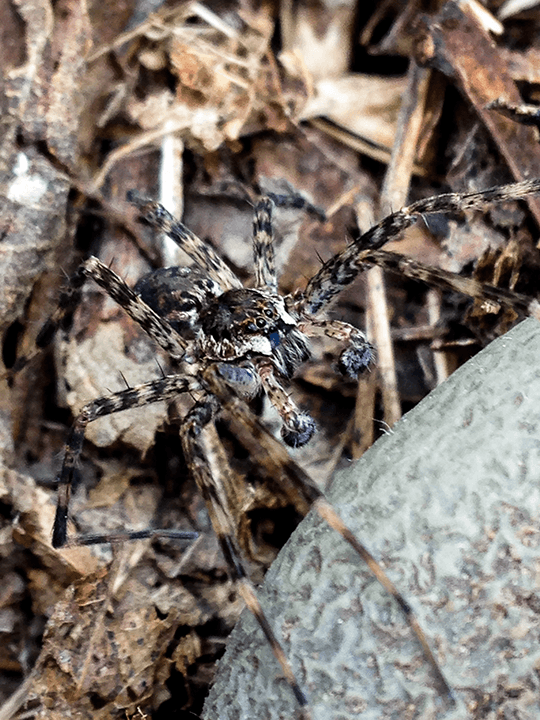 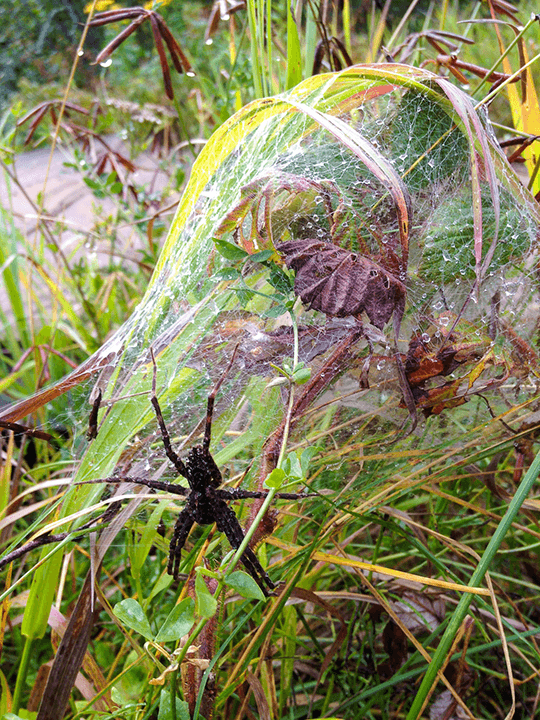 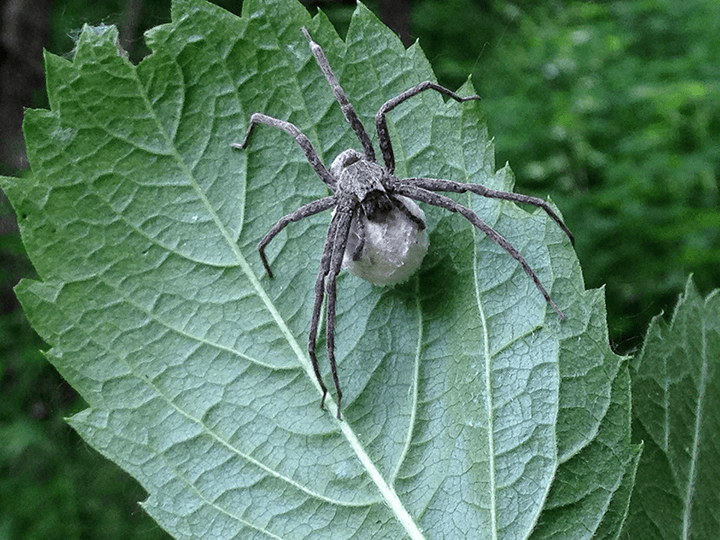 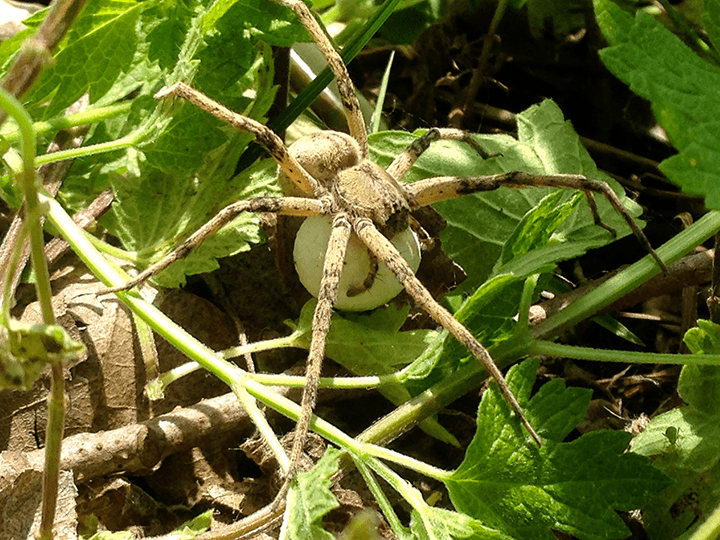 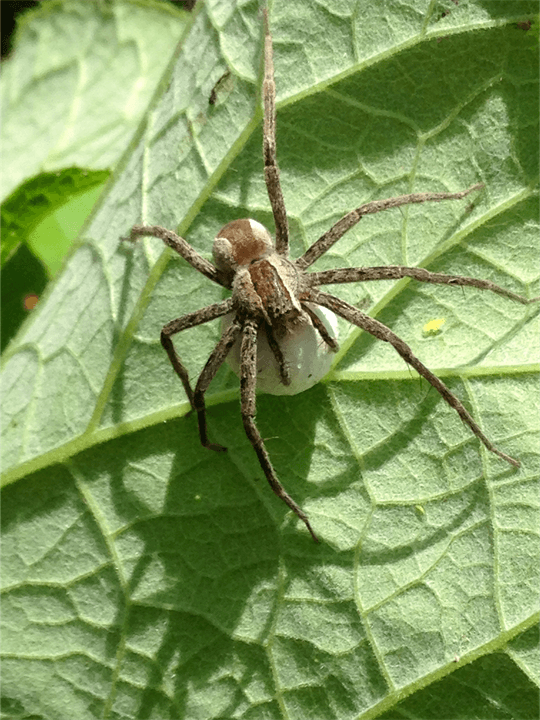 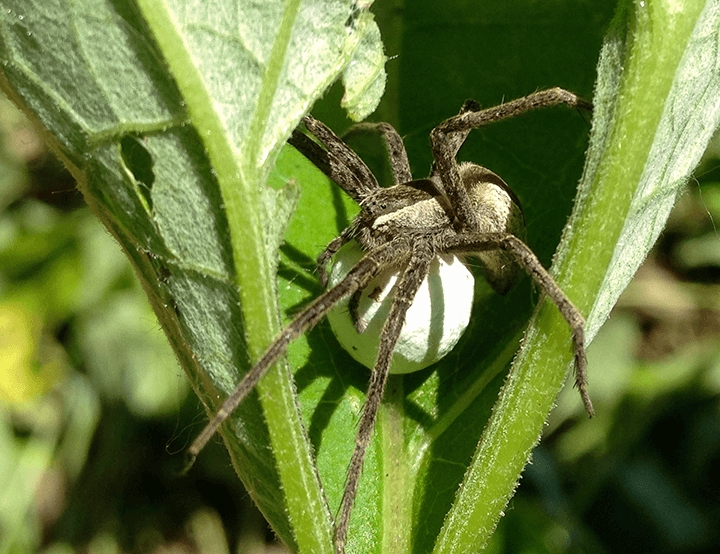 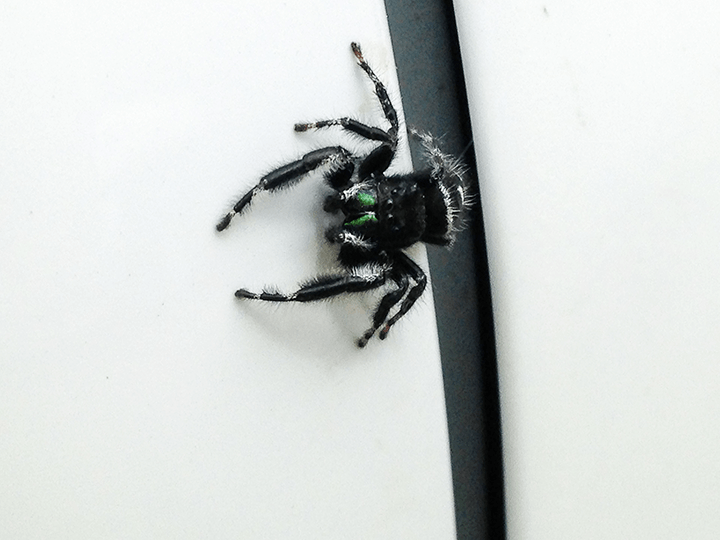 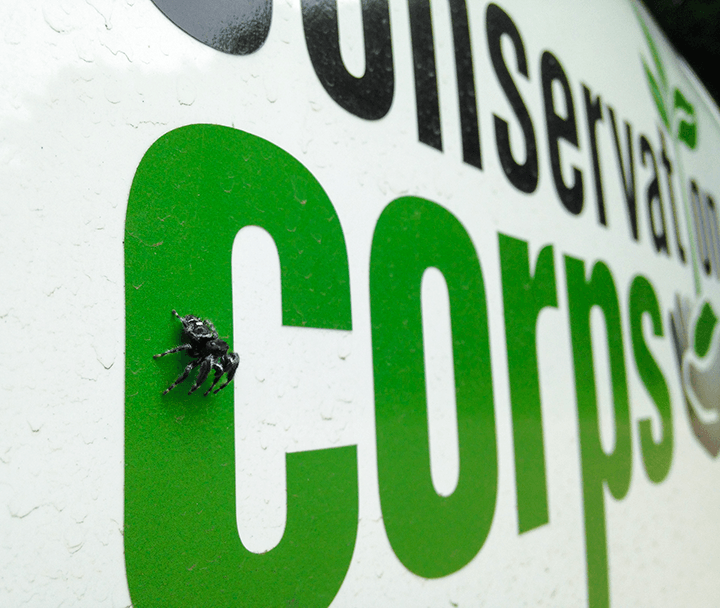